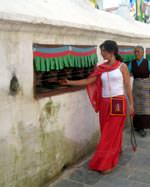 That very dream (which later on she learned was called Yoga Nidra) had a great impact on her, affecting her profoundly and permanently. It made her realize that she could keep doing what she was doing – or not – knowing that whatever she was doing didn’t add or subtract of who she already was, didn’t change her true nature, it only profoundly changed her perception of life…and death! It changed the way she perceived everything, infusing all of her actions and tasks with joy, vibrant life, passion, and enjoyment, while propelling her to be at service for the highest good of all. It also changed her radically from attachment to non-attachment. That day she had promised herself to somehow help as many people as she could; help them help themselves realize their completeness, their true nature.
Mihaela Wachsman, born in Romania during the communist reign, came to America many years ago, completely ignorant of the so called “spiritual life” and also of the amazing variety of religious experience available in a free country. Fascinated by the great number of faiths, she started looking into the various traditions, curious about where they all came from, and where they all go. 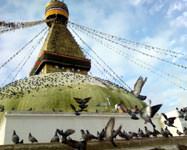 These experiences (of the meditation and mantra recitation with the pure intention for the benefit of all), radically transformed her. It was then that she had that profound dream. It was then that she realized that her own awakening was the greatest purpose of her life, that by being awake herself, she could truly be at service for the highest good, realizing there was no separation between all beings whatsoever. Contemplating and meditating for quite length of time on the meaning of the Prajnaparamita, of the Heart Sutra, she also understood what Buddhists meant by “emptiness”, and what “all phenomena is naturally the unity of interdependent origination and emptiness” meant. In other words, nothing is inherently existent, everything lacks of independent, solid, intrinsic existence, and all things that arise are mere appearances of interdependent origination. That also means that absolutely everyone and everything is interconnected at such deep level, that everyone’s thoughts and deeds have an effect on everyone’s else not just on themselves. Now, that also meant that everyone had a tremendous responsibility for their own thoughts, (since thoughts are “things”, they can uplift or hurt)….well, those who still haven’t realized “emptiness” yet.  Wow, what a realization! At the same time, there was a sense of relaxation knowing that everything was interconnected, that everyone can do their very best in everything they do, and then relax into the flow of life, without any attachment of the outcome of their endeavors. The phenomena, is completely free and unobstructed, and seeing all things nakedly and clear, there is nothing to attain or realize. Again, everything is perfect just as it is, completely pure and undefiled! Ah!

Praying for an answer about how to integrate her realizations and her “findings”, Mihaela was privileged to “bump” into Theosophy, following a chain of amazing synchronistic events which led her to Ojai, California. Theosophy answered all of her questions about inner religion, philosophy, science and the untapped powers (latent potential) in man. She never failed to take full advantage of this great opportunity (as she is now a faithful student of Theosophy, especially the “Secret Doctrine”, a wonderful compilation of how the universe and man came about (the only book supposedly, Albert Einstein had on his desk before his passing!). Mihaela is forever grateful to the Theosophical Society which unconditionally handed her all the necessary tools and teachings of the  ancient wisdom in order to help her with bringing all of her many glimpses into more of a continuum. 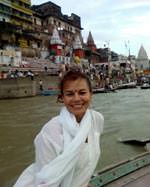 Mihaela felt a strong desire to integrate this wealth of spiritual wisdom and her “glimpses” into a practical and powerful practice of Theosophy/Raja Yoga/ Vajrayana Yoga-Yoga Of Joy/Qigong/Meditation/Self- Transformation that she could share with others. She became a lineage holder of the Tibetan Qigong and of  the Tibetan Vajrayana Yoga – Yoga Of Joy. Her quest for the right teachers successfully culminated in finding four great masters of our times: Master Zi Sheng  Wang , from whom she received a direct transmission of Tibetan Qigong,  Dakini  Master  Yuan Miao from whom she received a direct transmission of the Tibetan Vajrayana, “Yoga of  Joy”, Kenpo Choga Rinpoche  with whom she studied  and practiced the “Buddha Path” for fifteen years, starting in 2003 in Orcas Island, and Yangthang Rinpoche with whom she studied and practiced “Flight of the Garuda” in Ojai in 2006, and “Three Statements that Strike the Crucial Point (Tsik Sum Né Dek), that synthesizes the Great Perfection’s view, meditation and action in three pith instructions, held in Santa Cruz in 2013. Mihaela also took partial of the 700 empowerments of the collection of Rinchen Terzod, which was held for three months in San Francisco in 2010-2011. These transmissions are all the profound treasure lineages together.

For the last thirty years, never ceasing to better her skills, Mihaela has been training in Energy Healing and Energy Feng Shui with renown healer Fiona Whitmore in her home town Ojai. Also, after fifteen years of practicing Self -Transformation, Mihaela became also a facilitator of ST under the tutelage of Vic Hao Chin, the former president of the National Theosophical Society in Philippines. To this day she continues to study and practice avidly the ancient wisdom.

Mihaela hopes to convey through practice, study and meditation, that anyone can create a strong inner core as one’s being starts to function purely from within rather than from without. Through learning and practicing, one’s very being becomes purified and clean, rising one’s frequency, and at the same time starting the awakening process, dissolving the barriers of relative perception, and revealing the true nature of one’s existence.

Mihaela Wachsman, MA in Exercise Science (Temple University in Philadelphia) is a Certified Yoga/Qigong/Personal Trainer Instructor, Therapeutic Touch practitioner and Self Transformation Facilitator. Profoundly grateful to the teachings of Theosophy and her many teachers who have influenced and guided her, Mihaela keeps practicing gaining mastery over her own mind and feels strongly about giving back by still working on herself, teaching and being at service for the benefit of all sentient beings.